Genuine jazz, improvised music of the moment, is best experienced live. Preferably in a dark and intimate nightspot, peopled with knowledgeable hardcore fans – folks who are there to commune, not converse.

Every so often a fine night of America’s proudest native art form gets caught, almost by accident, lightning in a bottle. Tapes are made, stored, forgotten for a while, revisited and ultimately shared. “Now Hear This” is a case in point, recorded at one of mid-America’s finest jazz haunts, the sorely-missed Artists’ Quarter in St. Paul. And featuring a somber song never performed before or since – the moving, prayer-like, “Darkness.”

Taped over the course of two of the coldest nights of 2008, “Now Hear This” makes a strong case for Jon Pemberton’s skills as trumpeter, flugelhornist, composer, and democratic yet determined bandleader. The repertoire is deep and diverse, the playing freewheeling and fresh, the solos stirring. Pemberton surprised a lot of old fans when he made his CD debut with the swingin’ piano trio set, “On The Edge,” in 2010. This horn outing is long overdue.

On this chordless free-bop album, the anchoring rhythm section of Twin Cities jazz mainstays Tom Lewis (bass) and Kenny Horst (drums) is just as likely to jump into the foreground. And that’s a very good thing. The versatile Mr. Lewis can be heard all around town playing world music, R&B and folk, plus backing savvy singers. Still, his jazz chops always take precedence. Off the bandstand, Horst was the Artists’ Quarter’s dogged proprietor for decades. He has a long list of recording credits, notably appearing on CDs by Lee Konitz, Bob Malach, Billy Holloman, Bill Carrothers, Herbie Lewis, Carole Martin, Bob Rockwell, and Ira Sullivan.

The fun begins with “There Goes My Heart,” best known via Nat King Cole’s string-laden ballad rendition from 1953. Dinah Washington, Johnny Mathis, Ivory Joe Hunter, even “Little Miss Dynamite,” Brenda Lee, all made hay with the lonely lament. More to the jazz point, it was also recorded by venerable hard bop trumpeter, Kenny Dorham, on his 1962 album, “Matador.” But the song’s only rarely been heard since, so it’s ripe for reintroduction. Did I mention it was freezing outside? You can’t tell from this punchy, swaggering rendition – things get hot real fast!

When it comes to chordless bands, and many other things, Ornette Coleman was a true pioneer. So it’s fitting that Pemberton and his cohorts tackle Coleman’s rollicking, “Broadway Blues,” one of the “hit” tracks from his 1968 album, “New York Is Now!” Another fabled Texas saxophonist, Dewey Redman, was on the original recording. Kenny Horst, whose extroverted solo here is a highlight, backed Dewey many times over the years at the Artists’ Quarter. So, just one degree of separation. Prior to Mr. Horst’s athletic drum workout, dig the cool conversation between trumpet and bass!

With ‘Namely You,” we’re back in the realm of standard tunes and swing. Lilting and lovely, the song has an unlikely genesis. It was part of the score for the the 1956 Broadway show, “Li’l Abner.” Always known for surprising song choices, Sonny Rollins jumped right on the Daisy Mae/Abner duet, releasing the most famous jazz rendition, on his 1957 “Newk’s Time” album. Benny Golson was right on his tail, with the great Kenny Dorham once again on trumpet, waxing a memorable version for “The Modern Touch of Benny Golson” album in 1958. In this winning take, Pemberton and Marentic are as lyrical as any Dogpatch sweethearts could be, treating the melody with old-school respect, while Lewis whips out his bow for a solo that’s pining and pretty, precise and gently powerful.

Horst kicks off “Monk’s Dream” with a “wake up, folks!” drum flourish. Pemberton gets sassy, Marentic really digs in and has some complicated fun, and Lewis briefly references another Thelonious classic, “Ask Me Now.” This is one happy, hip dream!

From the fertile pen of another jazz giant, Charles Mingus, comes “Canon,” deep and soulful as any Southern spiritual. Beautiful sadness, rarely covered. The listener is dutifully transfixed.

And then it’s break time. “Now Hear This!” ends the same way Pemberton’s piano album, “On The Edge,” did -- with the appropriately peppy hard bop original, “Break for Zander.” Hey, when you have a good break tune, in the tradition of Art Blakey and “The Theme,” don’t mess with success! This is like a Jazz Messengers burner without the piano, which just means the bass has to drive even harder, and Kenny Horst gets to spread joy with sticks and kicks. And now if you’ll excuse me, I’d like to get one more tall Bacardi and diet with a lime, before last call... 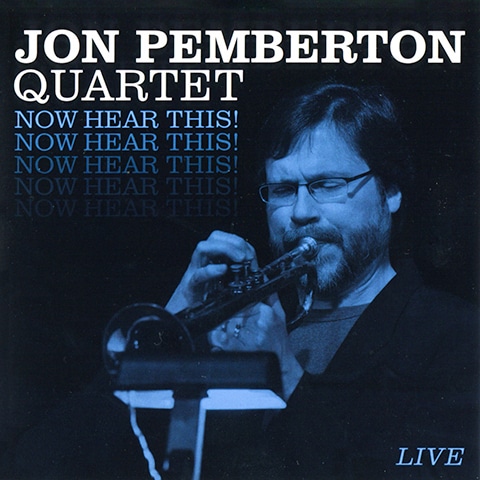 “Pemberton is as respected for the chops he has brought to hundreds of gigs over the past three decades as he is for being equally adept on piano and trumpet. His most recent release is a spellbinding archival recording captured at the Artists' Quarter.” -Twin Cities Hot Summer Jazz Fest