Jon Pemberton Trio: On the Edge

The first time that I heard Jon Pemberton play, he was a member of a groovy little group called The Skatet. They mixed bouncy Jamaican ska music with driving hard bop, and were led by a unique individual named Elmar "Mr. E." Romain, still going strong in a salsa band now, plus as a deejay in the wee hours of the overnight shift on KFAI-FM radio. Jon was in the horn section, playing trumpet.

I caught Pemberton many times in many contexts after that, always playing the trumpet. He led a fine group of his own dubbed The Pembertones for several years. Wonder where they got that name? It co-starred the late great Minnesota piano legend, Bobby Peterson, playing one of his other instruments, the alto sax. Pemberton also turned up in the avant jazz big band Imp Ork. And he staged a well-researched and hard-grooving yearly two-night bar tribute to his trumpet hero, Lee Morgan.

I can't recall exactly when I first heard Pemberton play his instrument of choice on this fine release —the piano. But I can pinpoint when he really made a favorable and unexpected keyboard impression on this freelance writer (and drinker) about town. Jon was hired to be in the backing band of a very interesting young singer and sometimes stand-up bassist from Portland, Belinda Underwood. He proved to be an agile, simpatico accompanist and combo anchor. Belinda liked him a lot, and she knows her pianists, having recorded and worked often with the estimable Benny Green. In fact, she was surprised to find that her piano man on a week's worth of club dates was known around the Twin Cities as a trumpeter.

Now with the release of On The Edge, Pemberton will definitely be leading a double life. And that's selling him short. Pianist/trumpeter/composer, the man from St. Paul is officially a triple threat.

Jon wastes no time grabbing our ear. "On The Edge" is driving, catchy and brainy—a groove tune for the Mensa set. It reminds me of the Kenny Barron classic, "Voyage," and that's what I call getting off on a very good foot.

It's clear that Pemberton is in great company, so let's introduce our rhythm section. Bassist Gary Raynor is heard weekly on the national public radio smash hit cash cow, A Prairie Home Companion, accompanying legendary Garrison Keillor and a motley array of special guests as a member of Guy's All-Star Shoe Band. Gary was Sammy Davis, Jr.'s personal touring bassist for several years, and he's recorded with everyone from the Jewish roots band, Klezmerica, to pop superstar Janet Jackson. Yet Raynor's a jazzman at heart, with that time, tone and feel coming through on every track. Dig his eloquent solo turn on the next selection, "Gail Ellen."

Meanwhile, Jay Epstein has come a long, long way from his early 1970s days as the drummer of the hitmaking rock group, Gypsy. One of the most sensitive, discreet, yet steadily swinging sticksmen in the Midwest, a poet of the cymbals, he's a perfect piano trio drummer. Epstein's two CDs as a leader— "Long Ago" and "Easy Company," both co-starring Bill Carrothers and Anthony Cox—leave no doubt about it.

Now back to our program. "Gail Ellen" is quite lovely, but also a little spikey and certainly propulsive, a dedication song to Bobby Peterson's wife. Here it's time to talk about Bobby P, Mr. Pemberton's piano mentor. A prodigy who joined the Buddy Rich band at the ripe old age of 21, Bobby Peterson was an unstoppable force on the keyboard, and a wonderful guy offstage. Already established as a jazz trumpeter, Pemberton told his pal about his childhood days as a fast-track student of classical piano. Could he build on that knowledge, learn about chord voicings and jazz playing and become a multi-instrumentalist? Peterson was more than casually enthusiastic -- in fact, he commenced giving his friend and sometimes bandmate several years of weekly piano lessons. For free! There would be no On The Edge were it not for Bobby Peterson, also represented later in the set by the fetching composition, "Cool Streams."

This CD has three great tribute tracks. "Remembering The Fallen" is a reverie, a musical elegy. It was written in response to the collapse of the 35W bridge in Minneapolis, a tragedy that made grim national news, and is dedicated to the victims, their families and friends. "Randall's Gone Away" is another example of Pemberton's flair for ballad-writing, another beautiful reverie, with an instantly familiar-sounding melody. It's dedicated to a favorite uncle and benefactor, a bachelor who lived into his 90s, and who recently passed on leaving his jazz nephew a small inheritance, some of which got spent at the recording studio. "One For John Clegg" is another romantic-sounding track, a salute to a salty barfly guy who played baritone sax in big bands and R&B groups, was jazz buyer and expert at a hip St. Paul record shop, and was beloved by legions of music students. Everybody called him JC, like the savior. Though knowing John, he was probably happier that he shared initials with Trane.

Speaking of Christ, we come to "The Lord's Prayer," my kinda religious music. Stately and groovy, spiritual and downhome funky. It was written during Pemberton's roughly two-year tenure as music director at Mercy Seat Lutheran Church in NE Minneapolis, a freewheeling house of worship well-known in musical circles. Written for congregational singing, it works quite nicely as an instrumental. Did I mention the audio quality? Matthew Zimmerman at Wild Sound did his usual splendid job — it sounds likes the guys are right there in the living room with ya. They're on the edge, you're on the couch.

"Monk's Mood" is the lone well-known cover, the set's jazz classic, and Pemberton's solo showcase. It's also the one track where echoes of his childhood classical piano studies surface. Dig that intro, maestro. Why arrangements like this of Monk masterpieces aren't routinely programmed in concert halls alongside Gershwin preludes or something by Satie escapes me. Gorgeous!

And now for the swingers in the house, we have the groove tunes. "Liner Notes" (like that title!) is one of Pemberton's oldest compositions, dating back to his college years (1979-83). An old-school 12-bar blues, it harkens back to the 1950s and 1960s, a halcyon era for jazz. Pemberton mentions Red Garland, Wynton Kelly, Tommy Flanagan, and Barry Harris as inspirations, and I'd also toss in my main man, Horace Silver. If "Liner Notes" is punchy yet easygoing, a walk in the downtown park, "Power Trip" is a high-speed ride down the Blue Note Records 1960s freeway. It's controlled intensity, right from Epstein's opening drum flourish. This song would sound great with a trumpet player blowing over the top (I have one in mind), or a full horn section with trumpet, sax and trombone. Next album?

Finally, there's "Break For Zander," written when Pemberton was getting regular gigs at the now-defunct Zander Cafe in St. Paul. It indeed sounds like a classic break tune, a set closer. Everybody gets their little turn to shine, and that's it for a bit. See ya in 15, no 30, make that 45 minutes and a cocktail or two. Or better yet, push play and say hello to Gail Ellen, Uncle Randall, and both JC's once again!

Tom Surowicz regularly writes about music he likes as a freelancer for the Minneapolis Star-Tribune. 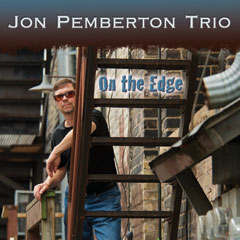